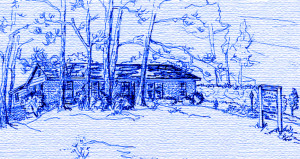 Our current Unitarian Universalist Fellowship did not come into existence until 1975. There were two earlier attempts in 1958 and 1967. It is difficult to say what happened to the first two attempts. Since UU was not well known in this part of the country, these early attempts were probably the results of efforts by “outsiders” such as soldiers at Fort Benning to provide a church similar to what they knew in other parts of the country. But the second group also faded away by 1974.

In 1974 Barry White and his wife arrived in Columbus from Durham, North Carolina. Barry and Pam attended a UU Church in Durham where Barry was a graduate student at Duke University. When they could not find a local UU church they inquired of the national headquarters whether anyone else was interested in UU in Columbus. They were provided the names of two other couples. The three couples got together at Barry’s apartment and decided to put an ad in the paper to determine if others were interested in establishing a UU Fellowship. About 20 people showed up and they began meeting in the club house at Barry’s apartment complex.

After about six months they moved their meeting place to the Downtown YMCA. They applied for recognition from the UUA which was granted in 1977. For about the next 12 years the group met in various locations around town including a private school, a store front location, an art gallery, two different motels, and a hotel. The number of meetings per month varied between twice a month and weekly. In all these locations they had to rent the meeting place and move their property in and out regularly. In about 1989, they began meeting in Dr. Ben Pike’s office at the St. Francis Medical Park. Dr. Pike’s office proved to be an excellent location because no rent was required for about two years, and they were able to increase their building fund to the grand sum of $16,000.

The Fellowship began a search in earnest for a permanent building. In June 1991 Dr. Pike discovered a building at 1442 Double Churches Road. This building belonged to Northside Christian Church, but they had outgrown the building. (They also wanted to get away from the liquor store across the street.) Dr. Pike put down $1,000 of his own money as an earnest payment. The group paid over the $16,000 in their building fund toward the total price of $86,000 and financed the balance of $70,000. Through super efforts of this small group, they managed to pay off the balance in eleven years. They had a “burn the mortgage” party in June 2002.

­ Many things which later members take for granted came into existence only slowly and through the common efforts of group members.The rituals – Lighting of the Chalice, Celebration of Life, and Closing Words – were mostly written by our part-time volunteer minister, Ed Wilson. Our sign, “Reason, Freedom, and Tolerance,” was painted by Liz Cos, who also did the sketch of our building which appears on our programs. Gerda Smith made the UU banner which is displayed on the front wall. The original piano was purchased in honor of Oliver Hall who left the Fellowship some money upon his death. The sound system was installed by Bobby Jackson, who played in a rock band; he bought it from one of his band members. We have from the beginning had a collection of books for a library. We obtained some brochures and lesson plans from UUA.

Over the years we have been more or less active with our parent organization, the Unitarian Universalist Association. In some years our members have taken leadership roles in the Mid­South District—Dr. Pike was very active, and Norm Horofker was very active more recently. We have always paid our “fair share” (amounts recommended by the UUA) to support the national organization.

We have almost always had a newsletter published on a monthly basis. This is really the best record of our activities over the years. Our collection is fairly complete from 1984 forward. Earlier than 1984 we have only one newsletter from 1977. The history notes the names of all the editors of the newsletter, but noteworthy are Marge Hall who was editor off and on for 10 years and Paul Lee for over 9 years!

The package beverage store has always been across the street. The prior church challenged them before the city council for being located too close to a church but lost that challenge. Until only recently the different store operators have always been very cooperative in allowing us to park in their parking lot, but recently the store has extended operating hours, and this circumstance has resulted in more restrictions on our parking.

We have tried to establish various activities over the years, including a Girl Scout troop, breast feeding group, Friday night socials, movie nights, game nights, a UU Student Union at Columbus College, a book club, and women’s group. When you read our detailed history you will discover that our currently popular Wednesday Night Discussion Group has ebbed and flowed over the years; one time there were even two groups on Wednesday night—the “Wild Ones” up front and “the Book Discussion Bunch” in the back!

Our programs have always been varied but depending on the makeup of the congregation have been more or less humanistic versus spiritual. We have no regular minister, but certain members volunteer to be responsible for planning programs for a month at a time. The current practice is to invite a UU minister to speak to our Fellowship at least once every month.

Over the years our membership has been as low as 12 members and as high as our current 64 members. Almost everyone in our Fellowship agrees we need to move to a larger building with better parking and better facilities for young children. We are now poised to move into the FOP Building on Heiferhorn Way in North Columbus. Now we will have room to expand our membership and our influence. The next several years promise to be very exciting times for our Fellowship.

*Note: A more detailed history of our congregation is available from our office administrator.

John Kamisky on “Evangelism and UU”

Unitarian Universalists, like many progressive people and groups, struggle with evangelism, which has a checkered history. The result is often a failure to reach people who might in UU a welcoming community. Fellowship member John Kamisky tackles this topic on this Sunday.